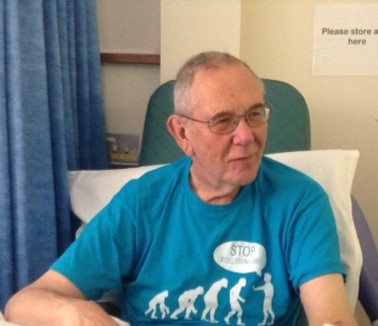 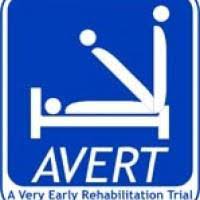 Gill came to visit me in hospital; for some reason she hadn’t slept much. Apparently, the study she had enlisted me for was AVERT (A Very Early Rehabilitation Trial). This was developed in Australia and taken up by many countries, including the UK. The principle was to start the patient on concentrated physiotherapy as quickly as possible after the stroke in order to assess whether this would accelerate recovery. Fortunately, it was the weekend so start was delayed. I could be ill in bed a little longer.

I soon discovered that one of the things that kept her awake was her cunning plan. She said we would face all the bad times together, look for every situation that was amusing or inspiring and laugh whenever we could. I couldn’t disagree because at that stage I could barely speak.

Visiting was allowed twice a day. It seemed unlikely it was possible to keep conversations going for so long. Fortunately, Gill had no problem.

She wandered off for some reason leaving me feeling very unaccompanied. Shortly after I was aware of a nurse looking down at me. I suddenly realised it was Kate, a lovely, bubbly friend and multi-career person. She was currently undergoing nurse training and had come to visit me during her break. Immediately, she started reading through my Private and Confidential file to check my treatment plan. I think she diagnosed I was upside down at one stage. Then turned the file round.

Patients on the trial received usual post stroke care. In addition, they were mobilised out of bed by trained nurses and physiotherapists according to a defined protocol and high-intensity exercise programme. The final phase of Avert UK was reported in The Lancet. It was subsequently concluded that, contrary to expectation, the early mobilisation protocol was associated with a reduction in the likelihood of a favourable outcome for patients and the trial was disbanded. It can’t have put me off, because I’ve since taken part in two further clinical trials.

In the afternoon, another visitor arrived, carrying what appeared to pedals from a bicycle on a stand. She was a physiotherapist and said she was going to start my exercise programme. With help from a nurse they sat me in a chair and put a table in front of me. I thought I was re-entering the real world until I almost fell out of the chair because nothing on the right side of my body worked. She started by putting a towel on the table and asked me to slide it forwards with my left hand and bring it back. I then had to repeat it using my left hand to help the right hand. This carried on for several minutes (or to the point of exhaustion if you were seriously keeping score.) Next, placed on the table, what turned out to be an arm bike. A clever device with handles for pedals, variable resistance and dials to show the amount of effort expended by each arm. At first, I needed help to hold my right hand on the pedal but, providing we didn’t travel at much more than 0 m.p.h., my hand would sit there cadging a lift.

The Senior Nurse came in and told me I was being transferred to a re-hab unit. The ambulance would be available some time during the morning. I rang Gill to say how nice it would be to have a 20 mile drive through the Somerset countryside after a long day’s work, instead of the 5 miles she was becoming used to. We reached lunch time, still no ambulance and no lunch for me as I wasn’t supposed to be there. They managed to panic up some food and I carried on waiting. I’ve always hated waiting, doing nothing, but the thought of climbing back into bed for a nap was really enticing. Undoubtedly, my being delayed prevented the next person claiming my bed. I began to realise how difficult it must be to schedule anything in a hospital. Any delays or emergency can change a day’s planning. It took a few phone calls for Gill to discover which hospital she was visiting after work, but by the early evening I had successfully moved on to the next stage. Rehab!

You can find a report on the AVERT trial on the Stroke Association website, here.